SFC President Jim DaRin brought the Zoom meeting to order at about 4:40pm with a moment of silence for former players who have recently passed away or are in need due poor health or economic distress.

The draft SFC Board Meeting Minutes of October 19, 2021 were approved by the Board and are now final.

Our replacement for Barb Nesci, Jenn Conley, made her first appearance at this Board Zoom meeting. Jenn provided the attending Board Members with a brief summary of her past experiences applicable to her new position of SFC Administrator.

5. Golfing with the Coaches Tournament

Jim DaRin informed the attending Board member that next year’s tournament will now be moved back into May. This is due to a change in recruiting timeframes for the Coaches. The new date for the Coaches Golf Tournament is May 23, 2022 a Monday. Nick Marsella, Chairman of the Golf Committee has reported to Jim DaRin that he would like 5 volunteers to help out at this event next year. Last year we only had 3 volunteers and had to forego ancillary events such as the putting contest or a hole in one prize.

6. Discussion on Coach Ben in the Ring of Honor

President Jim DaRin began the discussion with the recognition of Coach Ben at the new SU Veterans Building and the recent dedication/open house attended by numerous SFC members. The Coach Ben exhibit in this new facility is prominently displayed and the financial gifts from the SFC and various SFC members to this effort were duly recognized. However, the recent renovated Dome included a list of notable Syracuse University athletic figures (Jim Boeheim, Jim Brown, Ernie Davis, Floyd Little and Dwayne “Pearl’ Washington) in a “Ring of Honor” in the area above the 100 level. However, Coach Ben is not recognized in this ring of honor at the newly renovated Dome. The SFC Board members present felt that a coach with the number of wins, a National Championship and numerous other awards and accolades should have been also nominated to the Ring of Honor and will pursue this matter more fully in the near future.

A note went out from Barbara Nesci with the flier attached as to the opportunity to attend this year’s Football Awards Banquet at Drumlins on Sunday December 5, 2021 between 5:00-7:00pm followed by a Cocktail Hour with the Coaches. The cost is $30 per person or $250 per table. Jim DaRin mentioned that a single Table has been reserved for attending SFC Board Member’s and a quests Additional tables will be acquired depending upon the number of Board members attending and their guests. New SFC President Warren Harvey and Vice President Keenan Hale will be coming in from New Jersey to attend the Banquet. If other SFC members would like to attend they should RSVP with Jenna Rodgers at jrrickan@syr.edu or at T 315.443.6330 F 315.443.5353

8. Next SFC Board Zoom Meeting

The next SFC Board meeting will occur on Tuesday December 14, 2021 (usually the third Thursday of each month but the meeting is moved up one week this month as the third Tuesday would fall on December 21 of Christmas Week). The meeting agenda and the Zoom Meeting information will be sent out in the days prior to the meeting. 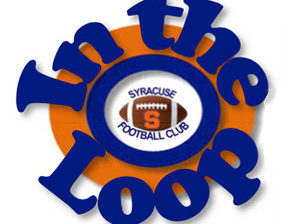